Checkout all the great TumbleOn Press

Do you know of any TumbleOn Press that we missed? Have something nice you want to say? Journalist who wants more info? Send us an email.

“TumbleOn is a good-looking new Tumblr streaming image viewer app for the iPad. The developers feel that images are the best part of Tumblr and their app focuses on optimizing Tumblr image viewing on the iPad.”

“If you are a Tumblr lover (lovr?), you’ll want to groove on your fav content with the TumbleOn iPad app.”

“TumbleOn for iPad is an image viewer for Tumblr with a very nice interface.”

“Unfortunately Tumblr has only a poorly-designed iOS app that still doesn’t run natively for the iPad. That is where TumbleOn comes in.”

“What makes TumbleOn really tick is that it can help you find other great blogs by analyzing pictures in a blog you’re currently viewing. Analyzing the pictures will show you other blogs that the pictures you’re seeing were shared from. This makes finding content and coming across new blogs om Tumblr really easy. “

– One Day One App

“If you are a Tumblr fan, and looking for an app that makes it easy to follow your favorite photo blogs (or find new ones), TumbleOn might be just what you have been looking for.”

“The strength of the app is its interface, which retrieves the images on our and other accounts that we follow and assemble in the form of a fascinating iconographic wall scroll through, where you can select the most interesting things.”

Other Notes from Fans

Matt Hoffner, Musician
TumbleOn is an excellent iPad app that utilizes the API very well. Although it is landscape only, the app features an excellent analyze tool which allows you to dig deeper about a users reblogs.
yBeegle on YouTube made a video about us!

“The best so far!
…looking forward to the next update :)” – Louai K

“Beautifully done
This app makes it so easy to browse your dashboard” – !glg! 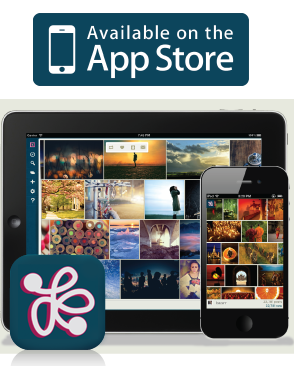